The Story Behind ADPi’s Brand

In case you haven’t heard (but we’re pretty sure you have!), Alpha Delta Pi is launching a new brand at Grand Convention this year. But what does that mean? Before we explain what you can expect with the “New ADPi,” let’s take a trip down memory lane.

It all started in 1851 when Eugenia recognized she needed change. Leaving home at 16 to attend the first college in the world to grant degrees to women just wasn’t enough for her. She wanted more from her college experience, so what did she do? She created the first secret society for women…ever.

They called themselves the Adelpheans. Eugenia, Octavia, Elizabeth, Mary, Sophronia, and Ella gathered in Eugenia’s room on May 15th, 1851, and fastened blue ribbons across their dresses. On these ribbons, the women had placed the clasped hands of friendship and their carefully chosen motto, “We Live for Each Other.” And, boom (boom), the first symbols of the society were born! It was only one year later, in 1852, when the Adelpheans decided to change the ribbon to a diamond shaped badge. Did someone say rebrand? Yes – we’ve always been ahead of the curve.

Fast forward to 1907, when we obtained the copyrights to the Greek letters “Alpha Delta Phi” and “We live for each other.” These could be considered our first identified logos. 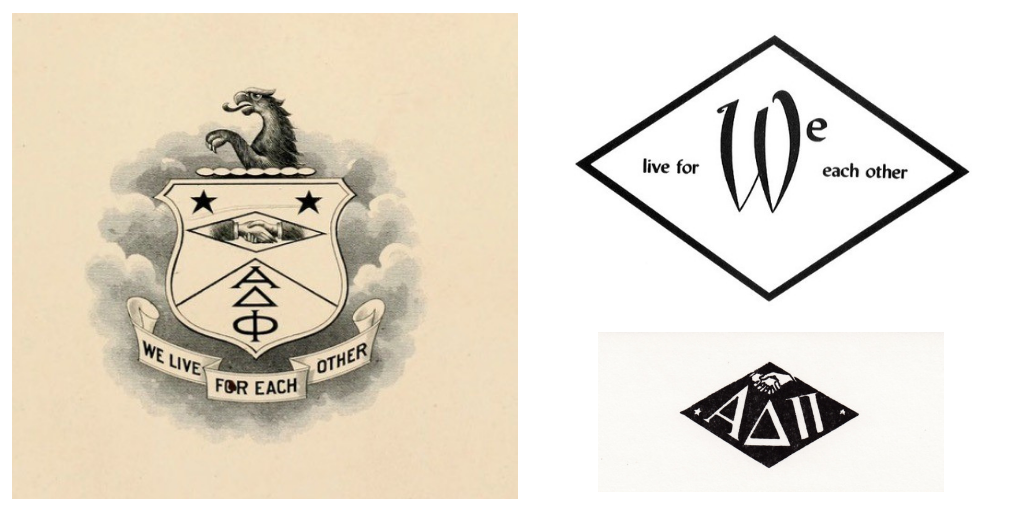 Mascot Moment: Our first coat-of-arms featured a DRAGON, and for several years before standardization, there were several mascots all at the same time, including a griffin, unicorn, and a serpent-looking creature! It wasn’t until 1915 that the lion appeared in our symbology atop our crest.

In 1913: Alpha Delta Phi was changed to Alpha Delta Pi (that’s now three different names we’ve called ourselves!) and the letters were used on jewelry (the badge) and as letterhead for stationary. The crest was also used as an identifiable symbol. 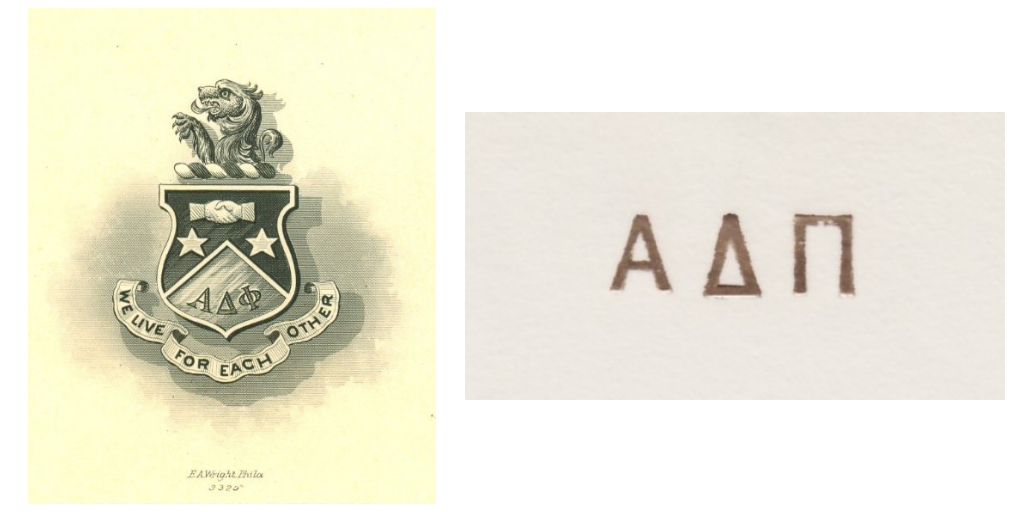 In 1919: The convention body voted to make changes and the present coat of arms that we use today was accepted – 100 years ago from 2019!

In the 1950s: the coat of arms, the Greek letters and words “Alpha Delta Pi” were registered as trademarks in the US and Canada. 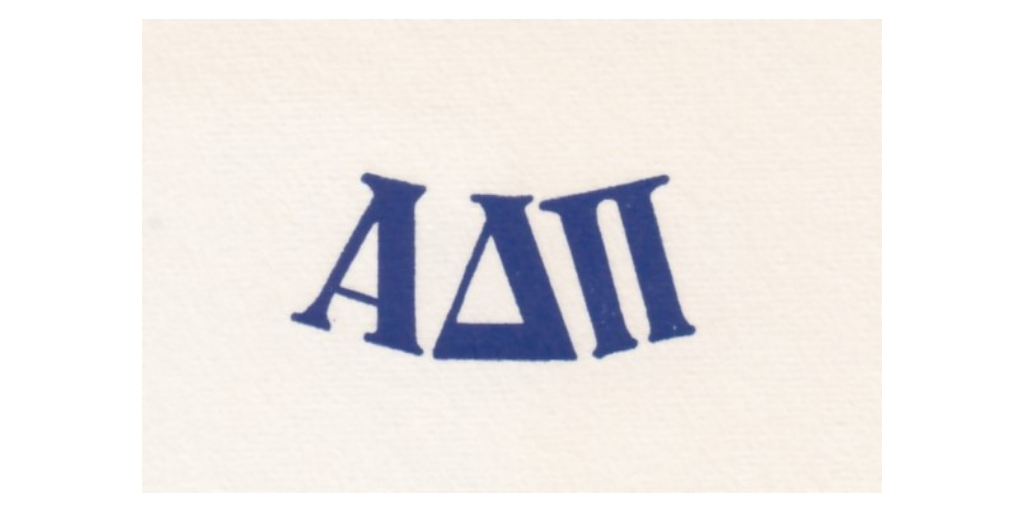 In 1951: the crest and “Alpha Delta Pi” in words and Greek letters first appeared on clothing. At the time, it was stated the crest could not be trademarked.

In 1992: The Foundation logo was trademarked. 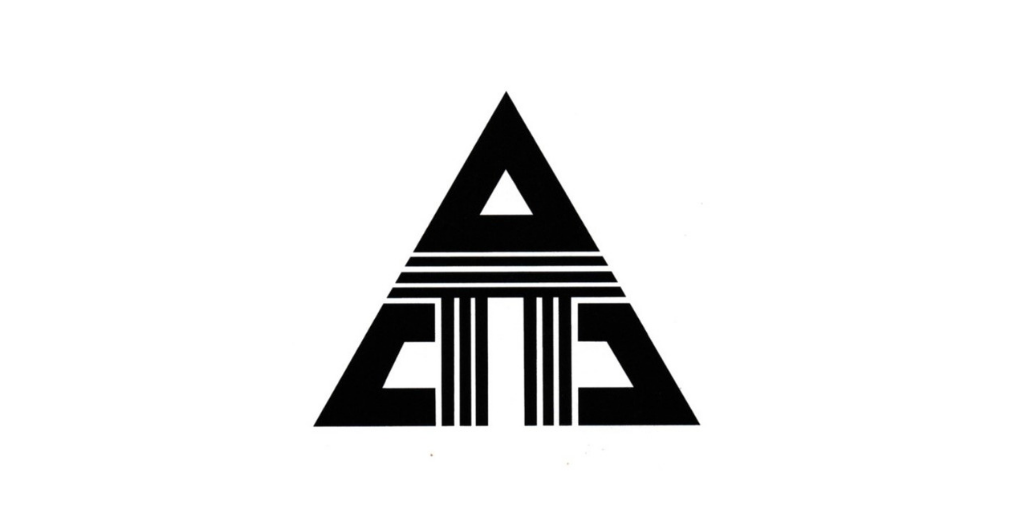 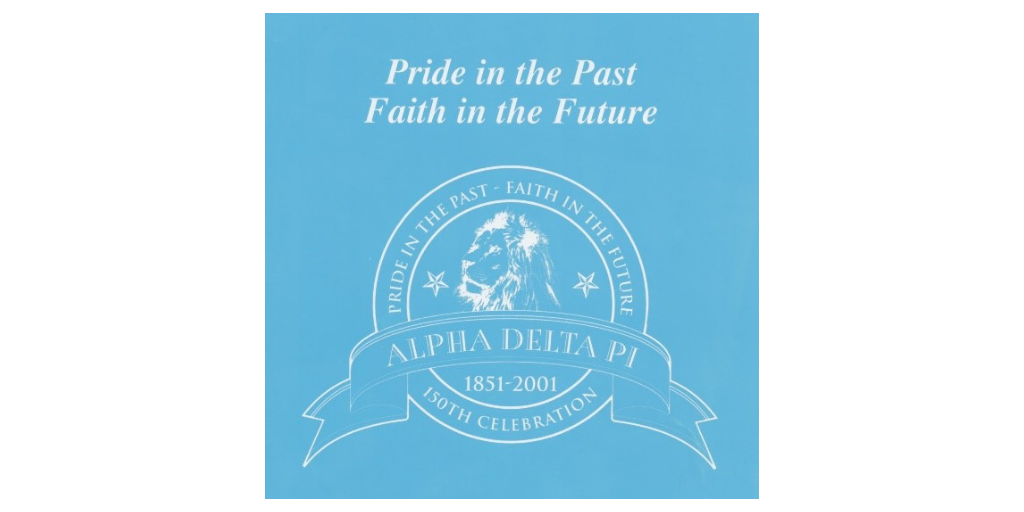 In 2001: “Alpha Delta Pi First. Finest. Forever. Since 1851.” with a graphic lion head was unveiled as our new branding and logo. Here, our primary brand colors of Blue and Gold were born, and we have used them ever since.

And, in 2015: there was a logo refresh, changing the tagline from block type to the “Adelphean” typeface. Our colors were slightly updated to a lighter blue and different shades of gold and purple, and this is what our brand is today! The diamond shape of our badge has also been used throughout our history as a symbol of Alpha Delta Pi.

So, why rebrand now? What led to a new brand launching in less than a week? It actually started over two years ago when the 2015-2017 Grand Council received feedback from the Recruitment and Marketing Directors that our members were ready for something new!

In 2017, Council appointed a Rebrand Committee including volunteers, collegians, and staff to begin working on what was next for Alpha Delta Pi. It took two years of research – including surveying several hundred members – many days of late-night conference calls, and countless emails back and forth, but we could not be more excited to show our membership the new and improved Alpha Delta Pi.

With this new brand comes a fresh new color palette and a new logo. But rest assured, azure blue and white will ALWAYS be our true colors, and Alphie will ALWAYS be our mascot. We are confident the new brand will set us apart in the best way and will make Eugenia proud – after all, if she hadn’t yearned for change, none of us would have ADPi to call home.