Convention Countdown: Why Should You Go?

Special thanks to Beth Mannle, Beta Beta – UT Chattanooga, for contributing to this blog post.

I had the great privilege of sitting down with former International President, Beth Mannle, as she answered this question elegantly, thoughtfully, and convincingly.

Beth attended her first Grand Convention in 1963 as a collegian and traveled there in a car packed with sisters from Nashville, TN to Hot Springs, AR. She recalled the first time she stepped in the doors — the room was filled with ADPi’s, “and it was amazing!” Year after year, she realized the people making these big decisions were not so different from her. Although she was a non-voting delegate in her first year attending, Beth went on to hold many positions in Alpha Delta Pi. She is still in awe of the fact that every fundamental and operational detail is brought to the vote of its own membership at Grand Convention.

As our conversation continued, Beth recounted story after story of past Grand Conventions – from exciting moments such as officially adopting Ronald McDonald House Charities as the international philanthropy in the 1979 Convention, to challenging years such as getting stuck in a blizzard during the 1973 Convention in Atlanta. Her fondest memory of Grand Convention was when her sister, an alumnae initiate, surprised her at the 150th anniversary Convention. Her sister passed away soon after, and Beth said she will always hold that Convention and time with her sister close to her heart. 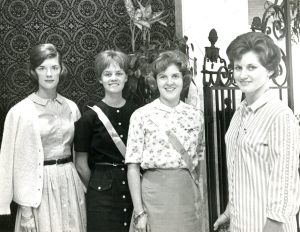 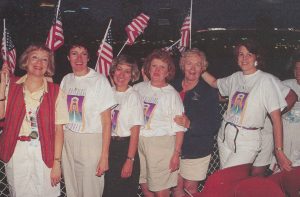 The 1995 Grand Convention in Cincinnati, OH 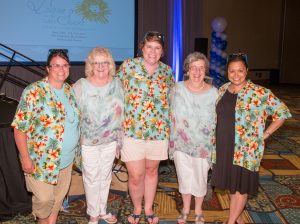 The 2017 Grand Convention in Hollywood, FL

While Beth continued recounting successes and trials throughout her years, one of her profound statements stuck with me: “The thing that goes over all Conventions is the history.” With ADPi being the first sorority, Beth marveled at the number of women involved in and influenced by our organization over so many years, while the traditions, rituals, and sentiments of our founders remain. She noted, “Here is an organization that has been around for 171 years. You may think, ‘they must have done something right!’ And when you come to Convention, you get a sense of what that ‘something’ is.”

Beth’s ultimate takeaway from each Grand Convention she has attended since 1963 is, “You won’t believe the people you meet. You share a bond with these women you’ve never met, but 20 years from now, you run into them and make an instant connection.” The benefits of meeting so many new friends and learning so much can be carried on and used throughout your life. 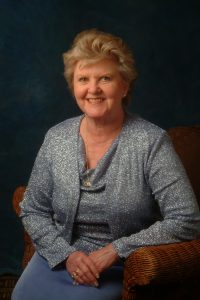 As we wrapped up our phone call on a sunny spring afternoon, Beth left me with her last piece of advice for anyone teetering on the edge of whether to attend Grand Convention this year. She replied, “Definitely go! Grand Convention will expose you to the entire ADPi. You will see the magnitude of what we’ve become. If you can attend Convention, it will change your view on Alpha Delta Pi.”