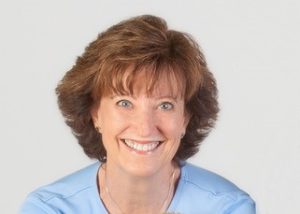 Terry Medley Curtis joined the Gamma Rho Chapter at Arizona State University (ASU) in 1976. Terry transferred to ASU as a junior, and Alpha Delta Pi helped her feel right at home on her new campus. Terry enjoyed everything about being an Alpha Delta Pi – even tedious chapter meetings! She fondly recalls the days when her sisters gathered in her dorm room to eat chips and salsa from their favorite Mexican restaurant (that was owned by her big sister’s parents). Terri even commented on the constant trail of crumbs that led the way for ADPi sisters to hang out.

More importantly, Alpha Delta Pi first introduced Terry to philanthropy, serving as her chapter’s Philanthropy Chair while she was a collegiate member. Since then, philanthropy has remained an important aspect of her life.

While her career in human resources kept Terry busy for the early part of her life, she eventually found time for Alpha Delta Pi again, dedicating her efforts to work with collegiate members as a chapter advisor and International Officer. By giving her time to Alpha Delta Pi, Terry’s life has been filled with close friendships and the opportunity to give back to the organization that brought her so much joy as a collegian.

For Terry and her husband Hale, philanthropic giving is more than just a one-time gift – it is a way to build a legacy. Terry learned this with her first gift to the Alpha Delta Pi Foundation, establishing a scholarship in her parents’ names to honor their memory and love of education. To continue their own legacy, Terry and Hale chose to establish an endowed gift to the Foundation.

When asked what inspired Terry to make this gift, she shared, “I was going to start the scholarship as part of my will, but then a friend advised that I might enjoy seeing how my gift helps scholarship recipients before I go toes up.” She continued by saying, “We don’t have kids so we’re leaving our assets to the things that are most important to us — education, animals, and medical research. The Alpha Delta Pi Foundation fulfills the education piece. Plus, the sorority adds such richness to my life. I get so much from it – especially from working with the collegians and my friendships with alumnae sisters.” Terry and Hale are also comfortable with their decision as they trust the Foundation to address the greatest needs of Alpha Delta Pi and that their gift will have a lasting, positive impact.