Getting the Words Out

We’re taught in school “that sticks and stones may break our bones, but words will never hurt”. While our parents and teachers might have meant well, they couldn’t have been more wrong. As we grew older, we realized the power that words do hold. What you say matters—and that doesn’t have to be a bad thing.

As a writer, words matter a lot to me. The power that I hold between the beginning of a sentence and a period is huge. While it takes someone one second to glance over it, I agonize over the voice, the punctuation, the way the words feel when they leave my fingers. 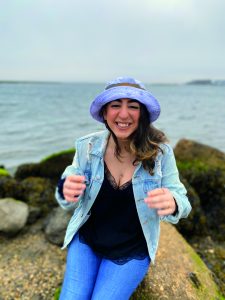 efore I could write I remember the way words impacted me as a child. As a kid, I drank a lot of orange juice (at about every meal) and I remember my parents always saying that I should stop drinking it so much, probably because of how much sugar was in it, but as a kid, I didn’t get that. One day, they said it one too many times that I just stopped cold turkey. Juice only at breakfast because I wanted to make sure I was doing the right thing. I didn’t know why I needed to stop drinking it, but I knew that it was said to me so many times, it must have been the right thing.

Well, it turns out I did need to be drinking orange juice. Sorry, Mom! I was an underweight child, and a lot of my calories were actually coming from the orange juice. I had lost weight, and my parents were worried, so they took me to the doctor. After a while, they asked me if I had been eating differently. When I said that I had cut out the juice, my parents hadn’t even remembered that they had been the ones telling me to do that. It wasn’t their fault, of course, they just didn’t realize the way their words were going to stick.

The words you say in passing can sometimes be the words that stick with someone longer than the time it took you to say it.

As a Senior member on the Collegiate Advisory Committee (CAC), I’ve had a lot of time to think about the power of my words. I, along with eight other sisters, represent the collegiate side of Alpha Delta Pi. We’re not the end-all-be-all, but sometimes we’re the launchpad for change.

During a discussion we had in 2020 in the heightening of the Black Lives Matter movement, I said to my sisters on the committee, “what would you want to say to your sisters right now?” It wasn’t a big statement. It wasn’t mind-blowing. It was just something I felt needed to be considered. We were looking at ADPi so largely instead of focusing on the individual women in our chapters and what they might be feeling. At the time, I didn’t think anything of what I said.

But, one of my sisters did.

It was months later and in a completely separate discussion, the other Senior member, Kae Coylar-Eta Upsilon, said that she kept reminding herself, “what would you want to say to your sisters right now?” I hadn’t even given that phrase a second thought, but Kae had. Later, she mentioned it in her blog post about her time on the CAC, and I really started to realize the impact words could have, the impact that my words could have. 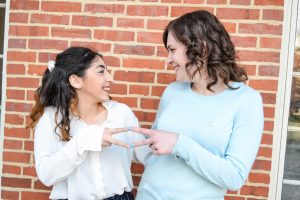 It meant so much to me that something I said made someone else feel something. It was all I had ever wanted as a writer.

It made me also realize how important everyone’s words are, that everyone has the chance to have an impact with what they say as long as someone else is listening.

That shined true a lot on the CAC. In every discussion we had with different volunteers and staff at ADPi, I noticed the way we recycled our language among members, the way we sourced and gave credit to the sister or sibling whose idea we had fallen in love with. It was like watching someone plant a seed and seeing it grow, an orange tree that was firmly planted in the ground with fruit for everyone to take with them and continue to share as they went on.

Maybe even make some juice out of it!

A writing professor once asked our class a question. “What are the words you don’t have yet? What do you need to say?” I think about that every day when I open my mouth and think about the words I am going to release into the world. Even when you are struggling to find the “right” words, sometimes getting them out there is more important than putting them in the prettiest package.

The conversation will never be right, and the words will never be perfect, but if you stop talking, the silence will start to have more of an impact than you can control. What do you need to say? When do you need to stop talking and listen? The impact of words can cover the distance, change minds, and do more than you might ever think is possible.

Just try and get the words out. See where they stick. I’ll make sure to be listening.